Where Should I Start? 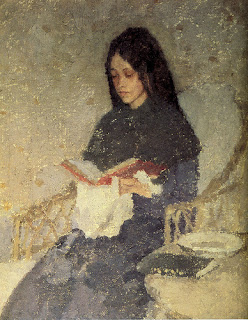 I am slowly working my way through Susan Hill's Howard's End is on the Landing, her account of a year selecting her reading just from the books already on her shelves. Slowly because there is so much in each chapter that sets me thinking. I need time to take in what she's saying and reflect on how it applies to me and my own reading journey. Originally I borrowed the book from the library. I'm on a very fixed income and I have to make as much use of the library as I can. However, it soon became apparent that there was no way that I was going to be able to keep it as long as necessary and so I've just bought my own copy. So far I've made it about one tenth of the way through and I intend to savour every single moment.

One of the first things that stopped me in my tracks was Hill's query when discussing reading Barbara Pym as to which of her books she should begin with.

Would I like Barbara Pym? Where should I start? Anywhere, really. Odd that. It is not always the case. You should never begin reading George Eliot with 'Middlemarch', nor Trollope with 'The Way we Live Now', and one of the lesser Muriel Sparks might put you off for good...I am glad I did not read 'The Mill on the Floss' first or I would never have tried another George Eliot, and 'Travels with my Aunt' is not a typical novel by Graham Greene, so it does not much matter if you do not care for it.

Wherever possible I have always tried to begin an author's works at the beginning, to make my way through their bibliography chronologically. In some instances this is essential. I found myself saying of two crime writers last week, "even though each book tells a separate story you need to read them in order to understand the relationships amongst the ongoing police personnel.". And, I have just put a novel to one side because I discovered it was a sequel and to understand it I was going to have to read its predecessor first. However, this doesn't really explain why I feel this compulsion to begin and the beginning and read until I get to the end.

I think the real motivating force here is the desire to understand how a writer's thought processes develop. When I did my first substantial piece of research into Shakespeare's plays, looking at the way in which he portrayed the character of the Fool, instinctively I read each play in the order written (as far as we can ever ascertain that) and found that it was possible to chart a change in his understanding of what the Fool stood for and was capable of, what the character was about. Reading chronologically was essential. I have never understood why people insist on reading the Narnia books in the order the story happens in fictional time. This isn't how Lewis wrote them and the growing darkness makes much more sense if you follow his growing distaste for the female characters as the writing process develops.

But, I can see that it some instances this might be a problem. What if the first full length Dickens I had read had been Pickwick Papers? I'm sorry if that happens to be your favourite Dickens; it leaves me totally unmoved. While I don't suppose I could have escaped without ever reading him again, I'm fairly certain I wouldn't have developed the abiding love for him that is one of the hallmarks of my reading life. I'm trying to remember what was my first. David Copperfield I expect. It was a set text in my first year at secondary school, but I think I'd already encountered a television version.

And, some writers take time to find their metier. I always think of the British children's writer, Jacqueline Wilson, in this respect. Best known now for her work for eight to twelve years olds that hides cutting edge exploration of social problems behind telling humour, few remember that she started writing much more straightforward stories for older teenagers. They were excellent and I wish they were still readily available, but if you were to start at the beginning of her output and find you didn't enjoy them you might never discover the later work which might be more to your taste.

In the end you find your way in to a writer's work in the way that best suits you and very often it will be through an act of serendipity. What matters is that you get there. I've never read Barbara Pym, so I shall take heart from what Hill says and just pick up whatever I can get at the library and hope that she is a writer I take to. Then perhaps I can work through her books chronologically and see what that experience has to say about her.